CD2: I Want To Be Happy; St. Louis Blues; Do You Know What lt Means To Miss New Orleans?; Get Out Of Here; Bugle Boy March; Make Me A Pallet On The Floor; Fruit Punch; How Come You Do Me Like You Do?; Mood Indigo; Wrap Your Troubles In Dreams; Moon glow; Turn Around

If Jazz clubs did quiz nights and a question was shaping up about a Danish trombonist, chances are the name Papa Bue would be out before the sentence was complete. Yet, there is another one, Ole Fessor Lindgreen, no doubt slightly less famous but certainly extremely important in the history of European Jazz. lt is also tempting to add the words ’rather more inventive’ when making the comparison, but then in praising the less well known one, there is no call to marginally slight the other. The point is, though, that Fessor did, some time in the late-’ 60s, make a conscious decision, perhaps like Humph and Chris Barber at critical points of their careers, to move on, to add to, to diverse- call it what you will. 1968 was the year of change in a decade in which the world was apparently spinning out of control. The Prague Spring began early- in January! There were a couple of rather famous assassinations the other side of the pond and -to cap it all- the MCC tour to South Africa was cancelled when Dolly was not allowed to travel!

lt was also the year that the venturesome Fessor formed his Big City Band. Slightly jaded with playing the same old stuff the same old way, he determined to admit other influences, Swing, R & Band, dare one breathe it, little discreet elements of Bop. lt was a good move, a game-changer as the politicos say, and heralded a long period of wonderful collaborations with visiting Americans of various Jazz and Blues persuasions, including Alton Purnell, Champion Jack Dupree, Eddie Lockjaw Davis, AI Casey, Bud Freeman, Sammy Price, Jay McShann, Ralph Sutton, Dicky Wells, Doe Cheatham and, not least, the irrepressible Wild Bill Davison. Big names, indeed, then and not a few of them pianists!

Fessor was 75 in May, 2013 and to mark the occasion Storyville have issued an extremely fine, superbly balanced two-volume tribute, with lots of mid to up-tempo numbers of great beauty and complexities of rhythm. The first CD features 17 tracks of some of the best of these collaborations, from the period 1973 to 1999. Volume two brings us pretty much up to date, with previously unreleased sessions from 2010 and 2012, the first with eight tracks featuring Duke Heitger.

The first CD kicks off with Wild Bill on cornet and stride pianist Ralph Sutton mellowing out in a lovely version of Sweet Lorraine. Sammy Price’s own composition, Chicken Out is something really rather wonderful. You may know it as an instrumental Rock ’n’ Roll minor hit for raging tenor sax, King Curtis, backed by Price’s sextet, that received a lot of airplay in 1959. Fessor’s version is more than twice as long as the original jukebox regulation two and a bit minutes and more than twice as earthy and rousing, featuring the harmonica of Elith ’Nu lie’ Nykjær, momentarily putting clarinet aside, and Steen Vig on tenor. Equally memorable and indicative of the sheer diversity of Fessor’s music is the recording where everyone defers to Jump Blues pianist par excellence, Jay McShann, here on T’Aint Nobody’s Business, in unusually reflective mood, sounding not unlike like the mature Memphis Slim, instrumentally and vocally.

He is always crisp and in the groove, coming in unerringly with the right phrase, sound and beat, but not given to the lengthy or extravagant solo.

But what of Fessor himself? ’Restrained’ and ’understated’ are words that come readily to mind when one specifically listens out for him on many tracks. He is, perhaps understandably, heard most on his own compositions, Crazy Eddie, Copenhagen Stew, Big Green, Greasy Ribs and The New Orleans Connection, most of these busily up-tempo. He is always crisp and in the groove, coming in unerringly with the right phrase, sound and beat, but not given to the lengthy or extravagant solo.

The second CD begins reminding us of more traditional fare. Recorded live at a boisterous festival, it finds Fessor tailgating merrily away, returning to his first love, perhaps, although by no stretch of imagination would we call it Trad jazz. As is almost always the case, he is backed by a rather fine pianist Phil Parnell, once of New Orleans but longtime UK resident. The small group that the CD goes out with is perfect to showcase Fessor at his most intimate, dominant and melodic. Listen to him bringing in Mood Indigo, whisperingly like Tom my Dorsey had been taking lessons from Louis Nelson (or vice versa!) or on Wrap Your Troubles In Dreams, where there is more than a hint of Teagarden crepitation. Wonderful stuff but there is even better to come on the final track, Ornette Coleman’s gloriously tergiversating Turn Around- which fades out as though a metaphor was being floated into the mind.

In a long career, thankfully still going strong, clearly Fessor has turned around a good few times, embracing a good many styles and this CD does eminently what it sets out to do: it shows the man in the impressive round.

It’s not too much of a stretch to say that most people reading this aren’t familiar with Ole “Fessor” Lindgreen. That the Danish trombonist/vocalist named this fine album For Bunchy will catch the eye of friends and fans of the late Bernard “Bunchy” Johnson, a New Orleans drummer who laid down solid rhythms both at home and abroad.

Immediately upon listening to the CD, it is apparent that Lindgreen, who cut his teeth on New Orleans traditional jazz styles, loves music. He and his next generation of Danish, more modern jazz artists bring a sense of adventure, humor, fun and swing to a diverse program of tunes that are altogether refreshing.

It’s a twist, as are many of the delightful, unexpected musical detours on the album.

Yes, these guys know how to play the classics straight up as heard on Sam Morgan’s “Bogalusa Strut,” complete with some soulful blowin’ by the leader. However, when Lindgreen pens his own “Barbarin Stomp” the band gives the tune an old school, big band rhythm and blues flavor. It’s a twist, as are many of the delightful, unexpected musical detours on the album.

To find Leadbelly’s “When the Boys Were Out on the Western Plains” (one might recognize it for its lyrics “Come a cow cow yicky…”) in the repertoire is itself a surprise. To hear it done in a hip, exciting, modern style is revolutionary. Everyone is on here with smart soloing by the pianist who continually moves the song forward and introduces a Latin tinge. Lindgreen, who also offers some sincerely delivered vocals on the album, steps up and displays influences ranging from ‘bone men Kid Ory to Roswell Rudd (as he writes in the disc’s comprehensive liner notes).

The most moving selection on the record is Lindgreen’s “For Bunchy.” It’s almost a dirge, but instead it’s played in waltz time. The clarinet truly cries yet with the control of a grieving relation trying not to upset the other mourners. The piano brings further comfort.

For Bunchy pays tribute to the New Orleans drummer in the best way possible, a totally musical endeavor that’s delivered with love. 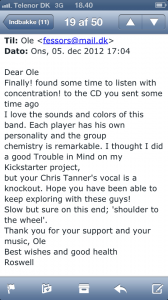 E-mailen fra Roswell – klik for at se i stort format

Dear Ole
Finally found some time to listen with concentration to the cd you sent some time ago. I Love the sounds and colurs of this band. Each player has his own personality and the group chemistry is remarkable. I thought I did a good trouble in mind on my Kickstarter project, but your Chris Tanner’s vocal is a knockout. Hope you have been able to keep exploring with these guys! Slow but sure on this end; ’shoulder to the wheel’.

Thank you for your support and your music, Ole

Ole ’Fessor’ Lindgreen is a major figure in European jazz, both as a creative musician and bandleader. He tells us on the sleeve notes off this CD that he started listening to Oliver, Morton, Dodds, Ory, et al and ”their warm, vibrant, bluesy musk became my musical foundation”. Over the years ’fessor’ has ventured into the whole rainbow of music we loosely call jazz, including, Swing, Gospel, R’n’B, and leading, playing and composing for his Big Band sessions.

This CD is another innovative venture. He took a group of highly skilled young musicians, played them the numbers he had in mind and then recorded them.

This CD is another innovative venture. He took a group of highly skilled young musicians, played them the numbers he had in mind and then recorded them. Tunes by Bertha ’Chippie’ Hill, Leadbelly and Spencer Williams sit easily alongside some original work. This is a band of good jazz musicians expressing the music their way.

The CD kicks off with El Ritmo with a Latin approach initially and then developing with a particularly hot solo from Jakob Dinesen on tenor sax. On all tracks there is fine trumpet playing from Peter Marrott who I had heard with the Six City Stompers. He leads in the Traditional style and then solos so inventively. Marko Martinovic’s piano, his organ work on track two, and throughout the recording, fits the moods and colours of the tunes well. The talented Chris Tanner, whom I remember from a meeting a few years ago on the lsland of Femø when he was a member of the Hoodangers, is so good. Listen to his low register then soaring to high on For ’Bunthy’ and his gentle work on Trouble ln Mind.

Lindgreen’s vocal on Some Cold, Rainy Day is right, and the tempo and backing from the rest of the band illustrate that those tempos the old blues singers held can be recaptured by today’s musicians. Shimme has a West Coast Dixieland feel about it, and When The Boys Were Out On The Western Front has some swinging unison ensemble passages. There is more than a nod toward the great Sam Morgan Band on Bogalusa Strut, without a copyist approach. Jens Sølund on bass spent many years in the Papa Bue band, so brings to the band top bass playing. Morten Ærø, another member of the Six City Stompers drives the band along with percussive imagination.

Some of the musicians were not previously known to me, and probably the same for some of our UK readers, so here is an introduction to a multinational band, making good music together. They play their music their way, and to me, the roots of the music we call Traditional jazz are still showing.

The CD title ’For Bunchy’ is dedicated to the memory of the late Bernard ’Bunchy’ Johnson from New Orleans, with whom Ole ’Fessor’ Lindgreen had toured with.